Government Needs To Get Tough On Energy Efficiency 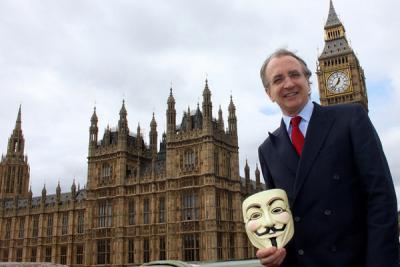 Directly descended from Guy Fawkes, Steven Fawkes is on a mission to revolutionise energy efficiency. He wants to upturn the notion that it is not sexy or cool or hard to invest in – but easy to do and a great financial investment. This Londoner, who’s devoted his whole life to helping others do more with less, is full of passion about the topic.

Steven’s grandfather traced his genealogy back to Guido Fawkes, the infamous Yorkshire-born mercenary and munitions expert who was left by his aristocratic employers to take the rap for the Gunpowder Plot. Ever since then, Guy has been known as the only honest man ever to enter Parliament.

Steven, one of only six people in the world who can claim descendancy from the conspirator, frequently quotes this to emphasise his own honesty. He is doing so this week for the benefit of Treasury mandarins, in response to their request for advice on what mechanism should replace the Green Deal for home energy efficiency, that was scrapped by the Conservatives last month for delivering poor value for money.

Steven is senior adviser to the Investor Confidence Project which, backed by €1.92m of EC grant-aid, is hoping to change perceptions of energy efficiency among investors. He’s also a member of the Investment Committee of the London Energy Efficiency Fund and comes with 30 years experience of energy efficiency, including founding two energy service companies.

“Energy efficiency is potentially the biggest value opportunity on the planet,” says Steven, standing in Westminster where his infamous ancestor also made history. “The world spends $6 trillion on energy so saving one third would equate to $2 trillion savings. Are we saying we don’t need this? And don’t forget the co-benefits – real and measurable ones such as improved productivity, health, life-saving and jobs, which often are not considered in the cost-benefit equation.

“Governments and NGOs have for years been banging on about how energy-efficiency is the low hanging fruit, often bringing a healthy return on investment,” says Steven. “But, despite the actions of a few market leaders such as M&S, investing in it is clearly not as easy as it’s made out to be, otherwise everybody would be at it. We want to change that. We want to make it become an indispensable part of every institutional investor’s portfolio.”

Many companies are nowadays putting up wind turbines and sticking solar panels on their roofs as a way of generating obvious and clearly demonstrable financial returns, fuelled by healthy subsidies, even if it’s nothing to do with their core business. So why not with energy efficiency projects like insulation, draught-proofing and replacing old boilers, which don’t need subsidies? The trouble with these is that each project is as different as one building is from another and the transaction costs are high.

So, says Steven, “by making energy efficiency a more investable asset class we will be amazed by how much we can improve from the current low levels of efficiency that are the norm. What if a package was available that could make investing in energy efficiency as easy as investing in renewable energy? What if investors could be given the confidence they need and a standardised approach that reduces high transaction costs?”

Originated by the Emnvironmental Defense Fund in the US, it is already attracting big name investors in the banking world, this initiative is working to transform the energy efficiency market by streamlining transactions and increasing the reliability of projected energy savings for investors. The intention is to build a marketplace for standardised energy efficiency projects. The individual projects can then be aggregated and traded by institutional investors on secondary markets – just like mortgages or other profitable asset-backed securities. As a result, ICP will be of interest to building owners, project developers, finance and energy service providers, insurers, local authorities and utilities.

The potential is huge: the European Commission puts the size of the investment required at around €100bn per year[i]. The key to unlocking access to this market, Steven explains, is the ICP System, that standardizes how energy efficiency projects are developed and measured, in the savings projections and underlying investment yields, via a series of Investor Confidence Project Protocols. “These are equivalent of the standardised approaches investors use when looking at investing in energy supply projects,” he says.

“Quality is guaranteed through independent assurance, the application of monitored best practice standards to each phase of a building retrofit, and by contracting the work to industry-leading professionals.” The result is Investor Ready Energy EfficiencyTM projects.

For investors, the near-term benefit of this will involve a significant increase in deal flow. Increasing the number of fundable projects will in turn result in significant long-term benefits including:

From the investors’ point of view, limited actuarial-quality project data and industry fragmentation have been discouragements to putting their cash into energy efficiency. To remedy this, ICP Europe is forging strategic alliances with the financial and efficiency sectors to develop renovation projects and industry standardization and embed the Protocols into their financing process.

“At the same time, we’re collaborating with government and civil society groups to facilitate the necessary public policies and education activities to support adoption of our products and services,” he says. Initially ICP is working in Austria, Bulgaria, Germany, Portugal and the U.K., but the project will later be rolled out across Europe. In the UK alone, it could create over 100,000 direct and indirect jobs, quickly and across the UK[ii]. There’s a human angle too – 7 million people live in fuel poverty in the UK, causing poor health and premature death[iii]. “26,000 people die of the cold each year, with at least one-third of these deaths due to people living in cold homes,” says Ingrid Holmes of E3G.

Ed Wallis, editorial director and senior research fellow at the Fabian Society, has called for better energy efficiency to be “a national mission”, saying that for too long “the debate around energy in this country has focussed so far on prices and supply”.

Fawkes concurs: “Energy efficiency has provided more energy services over the last 40 years than any other energy resource, and we did that without really trying. Imagine what we can do if we make a real effort!” concludes Steve. “In buildings it has high returns without subsidy, is quick to implement and completely clean.”

Certainly better than blowing them up like Guy Fawkes and starting again.